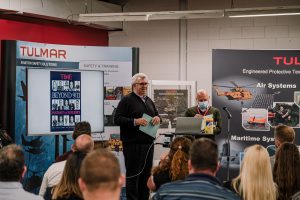 is said to be the last person to make it out of the South Tower of the World Trade Center alive on September 11, 2001. He shared his story with management and senior staff at our office recently.  Ron, a native of Hamilton Ontario was a trader on the 84th floor of the World Trade Center when United Flight 175 slammed into the building.  The starboard wing of the Boeing 767 sliced through the floor he was working on.  In an instant, most of Ron’s colleagues were taken from this world.

After recovering from the impact, Ron and two other survivors decided they need to make there way out of the doomed building and found a single stairwell that was their lifeline.  Struggling through thick, dark, toxic smoke Ron’s path to safety was blocked by debris and flames.  In a compelling and heart wrenching way, Ron describes how the lack of oxygen was slowly causing him to lose consciousness.  As he began to drift off and physically succumb to the lack of air, he heard an unmistakably clear voice urging him to get up and keep moving…it was the only way he would ever see his wife and four children again.     A man of deep faith, Ron attributes the voice to a higher being.  To others, he would concede that this voice may have been a final surge of adrenaline into his system…. regardless, this clear voice got Ron up, through the burning dry wall and moving down to safety.

Seventy some floors later, Ron emerged to the square between the Twin Towers and only said the sight was one of unimaginable horrors….”a war zone.” A security guard sent Ron back inside and suggested he use the concourse level to move south and away form the destruction on the ground.  As Ron made his way down to the lower levels, he felt a surge of energy, witnessed a fire ball to his right and was thrown through the concourse. 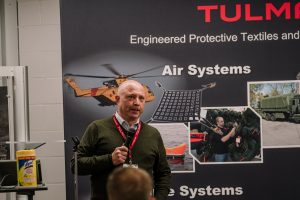 Waking up in hospital three days later, Ron was alive.  With burns to 80% of his body, a fractured vertebrae and deep lacerations on his head, Ron’s next memory was of his wife Mary at his bedside.  Ron DiFrancesco had survived the worst terror attack in American history and, according to Forbes and Time Magazine, was the last person to get out of the South Tower of the World Trade Center alive.  Ron’s story was profiled by Time Magazine on the occasion of the tenth anniversary of the attacks. https://time.com/collection-post/4476502/ron-difrancesco%E2%80%A8-beyond-9-11/. 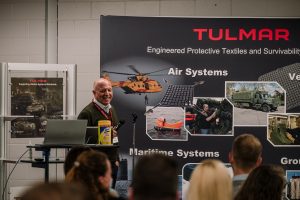 We collectively sat in silence, disbelief, and anguish as we heard Ron’s story on the production floor of Tulmar Safety Systems.  Ron challenged all of us to live in the moment, acknowledge our frailty and above all, always be kind to one another.  As Ron said, we are all going through our own challenges.  This year, this pandemic, these crazy circumstances we are in today take a toll on all of us.  Smile to strangers, be patient with people, know that every single one of us is going through our own form of anguish…. some little….some big.  We don’t know everyone’s story, so treat everyone, all the time with care and concern.  Timely guidance.